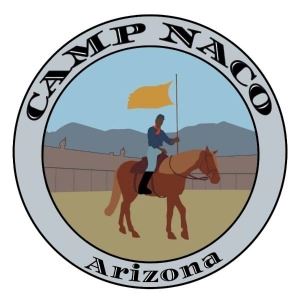 Camp Naco was built in 1919 by the US War Department’s Mexican Border Defense Construction Project, a response to unsettled conditions along the US/Mexico border resulting from the Mexican revolution. Part of a 1,200-mile chain of thirty-five permanent military camps along the border from Brownsville, Texas, to Arivaca, Arizona, Camp Naco was one of only two constructed of adobe. When the camps were decommissioned in 1923, most were deconstructed so that materials could be used elsewhere, but Camp Naco, built of adobe, remained in place, and passed into private hands. As a result, it remains the only camp to retain its historic integrity today.

In 1910 a tent camp manned by the Ninth and Tenth Cavalry of Buffalo Soldiers was established at the point where the El Paso and Southwestern railroad line crossed the border to link the American-owned mines at Canonea, Sonora, to processing facilities in Arizona. Its mission was to protect the railroad, prevent the smuggling of arms, cattle, and other supplies across the border to rebel forces in Mexico, and restrain any lawlessness and banditry that might spill over the border into Arizona. In 1919 a permanent camp was constructed.

Today Camp Naco is the physical reminder of a decade of border unrest as opposing Mexican forces battled for control of their country, as plans were hatched to reclaim the American Southwest for Mexico, and as Germany attempted to enroll Mexico as an ally in World War I. It also illuminates the important role of the Buffalo Soldiers as effective peacekeepers within the segregated military of the period.

The camp is located at the corner of Newell Street and Willson in Naco.

With funding from Arizona Humanities, a story map is being developed to provide more depth and context to this important historic site. When completed, a link will be posted here. In the meantime, you can read more at